When Did Humans Start Drinking Alcohol?

A new study shows that about 10 million years ago, long before humans began to ferment food intentionally, our primate ancestors had the ability to metabolize alcohol. The study advances the idea that humankind enjoyed a longer evolutionary period to adapt to alcohol than was previously thought.

Earlier studies suggested that humans started drinking alcohol thousands of years ago. This was the time when humans developed the fermentation process, which produced alcohol or ethanol.  Research shows, however, that primates have enjoyed fermented fruits for the past 10 million years, suggesting that humans had a fully evolved ability to consume alcohol. 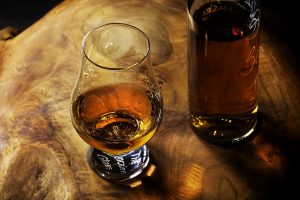 A team lead by Matthew Carrigan, a biologist at the Santa Fe College in Gainesville, Florida, studied humans’ ancestral lineage to determine when the ability to produce a gut enzyme needed to metabolize alcohol first appeared. They checked the guts of primates from whom humans diverged millions of years ago. The team looked for the presence of the enzyme called ADH4.

They learned that the digestive enzyme ADH4, which breaks down alcohol from the tongue to the stomach, was found in abundance in gorillas even millions of years ago. The enzyme is also found in more recent human ancestors such as the chimpanzee and the bonobo.

The presence of ADH4 showed that the distant ancestors of humans – the orang-utan, gibbon, and baboon – had a well-developed taste for alcohol and ate fermented food without getting sick. Without ADH4, eating rotten foods would have resulted in stomach pain, nausea, and physical discomfort.

The 10-million-year relationship with alcohol coincided with the middle Miocene climatic transition when the ecosystem of East Africa gave way to grasslands. During that period, the human hominoid ancestors, who were tree dwellers and consumers of fruits, found fallen fruit on the ground that had been taken over by yeast in different stages of fermentation. Those that lived on the ground and ate the spoilage fared better than those who remained dependent on the tree fruits.

Our human ancestors apparently enjoyed the pleasant effect of consuming fermented fruits so much that they ultimately developed the tools and capabilities millions of years later to adapt the process to the production of wines, beers, and spirits.

When you need your body to evolve and process/detox quicker than waiting for one million years of evolution, try Pure Detox 1 hour detox drinks.